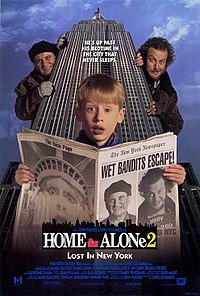 Home Alone 2: Lost in New York is a 1992 American comedy film written and produced by John Hughes and directed by Chris Columbus. It is the second film in the Home Alone series and the sequel to the 1990 film Home Alone. The film stars Macaulay Culkin, Joe Pesci, Daniel Stern, John Heard, Tim Curry, Brenda Fricker and Catherine O'Hara. The film follows Kevin (Culkin), a 10-year-old boy, who once again must fend off two burglars, Harry and Marv (Pesci and Stern), after he is mistakenly separated from his family on their Christmas vacation.

The McCallister family is preparing to spend Christmas in Miami, and gathers at Peter and Kate's Chicago home. Their youngest son, Kevin, sees Florida as contradictory to Christmas, due to its lack of Christmas trees. Later, at a school pageant, Kevin's brother, Buzz, pulls a prank against him, and Kevin retaliates, ruining the pageant. Buzz apologizes, but Kevin berates his family before storming to the attic, wishing to have his own vacation alone. The family accidentally oversleeps again and they rush to make their flight.