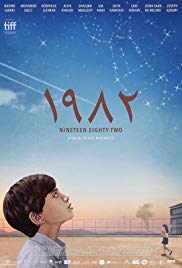 1982 is a Lebanese drama film, directed by Oualid Mouaness and released in 2019.

Set against the beginning of the 1982 Lebanon War, the film stars Nadine Labaki as Yasmine, a schoolteacher in Beirut, and Mohamad Dalli as Wissam, a young boy in her class who is trying to find the courage to tell his classmate Joana (Gia Madi) that he has a crush on her.