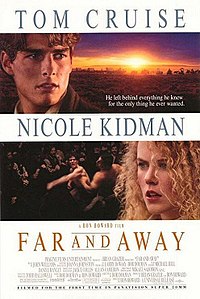 Far and Away is a 1992 American epic Western romantic adventure drama film directed by Ron Howard from a script by Howard and Bob Dolman. It stars Tom Cruise and Nicole Kidman. This was the last cinematography credit for Mikael Salomon before he moved on to a directing career, and the music score was done by John Williams. It was screened out of competition at the 1992 Cannes Film Festival.

In Ireland in 1892, Joseph Donnelly's father dies, but comes back to life for a few moments to tell Joseph to not give up his dream of owning his own land someday. His family home is burned down by his landlord Daniel Christie's men because of unpaid rent. Joseph tries killing Daniel, but he injures himself in the process and is nursed back to health by Nora, Daniel's wife, and her daughter, Shannon, intending to hang him after he heals from his injuries. Joseph meets Shannon, who plans to run away from home and travel to America, as there is land being given away for free there. She offers to take Joseph with her as her servant, because a woman can't travel alone without being questioned. But he refuses so he can duel Christie's foreman, Stephen Chase, who set fire to the Donnelly home. Christie meets Joseph before the duel and tells him that he had nothing do with Joseph's family's eviction because the land is managed by Chase. The duel begins, but Shannon rescues Joseph.