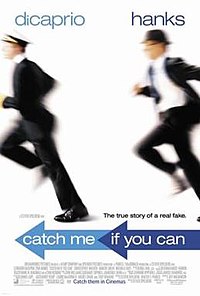 Catch Me If You Can is a 2002 American biographical crime comedy-drama film directed and produced by Steven Spielberg and starring Leonardo DiCaprio and Tom Hanks with Christopher Walken, Martin Sheen, Nathalie Baye, Amy Adams and James Brolin in supporting roles. The screenplay by Jeff Nathanson is based on the "autobiography" of Frank Abagnale, who claims that before his 19th birthday, he successfully performed cons worth millions of dollars by posing as a Pan American World Airways pilot, a Georgia doctor, and a Louisiana parish prosecutor. The truth of his story is questionable.

In 1963, Frank William Abagnale Jr. lives in New Rochelle, New York with his father Frank Abagnale Sr. and his French mother Paula. During his youth, he witnesses his father's many techniques for conning people. Because of Frank Sr.'s tax problems with the Internal Revenue Service, the family is forced to move from their large home to a small apartment.