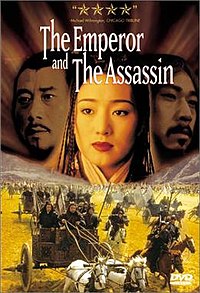 The Emperor and the Assassin 1998

The Emperor and the Assassin, also known as The First Emperor, is a 1998 - 1999 Chinese historical romance film based primarily on Jing Ke's assassination attempt on the King of Qin, as described in Sima Qian's Records of the Grand Historian. The film was directed by Chen Kaige and stars Gong Li, Zhang Fengyi, Li Xuejian, and Zhou Xun. The film was well received critically and won the Technical Prize at the 1999 Cannes Film Festival. It was the most expensive Chinese film made at the time, costing US$20 million.

The film covers much of Ying Zheng's career, recalling his early experiences as a hostage and foreshadowing his dominance over China. He is essentially depicted as an idealist seeking to impose a peace or unity on the world. However, his experiencing of various betrayals and losses slowly turn him into a mad tyrant. The story consists of three main incidents: the attempt by Jing Ke to assassinate Ying Zheng in 227 BCE; the (fictitious) rumour of a Chief Minister's having sired the latter before transferring his concubine to become the Queen Dowager; and the story of an official having sired children by the Queen Dowager herself. The first incident is the climax of the film, with earlier scenes foreshadowing it; the other two incidents occur between the fictional genesis and historical manifestation of the first.