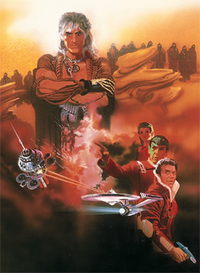 Star Trek II: The Wrath of Khan is a 1982 American science fiction film directed by Nicholas Meyer and based on the television series Star Trek. It is the second film in the Star Trek film series, and is a sequel to Star Trek: The Motion Picture (1979). The plot features Admiral James T. Kirk (William Shatner) and the crew of the starship USS Enterprise facing off against the genetically engineered tyrant Khan Noonien Singh (Ricardo Montalbán), a character who first appeared in the 1967 Star Trek episode "Space Seed". When Khan escapes from a 15-year exile to exact revenge on Kirk, the crew of the Enterprise must stop him from acquiring a powerful terraforming device named Genesis. The film is the beginning of a three-film story arc that continues with the film Star Trek III: The Search for Spock (1984) and concludes with the film Star Trek IV: The Voyage Home (1986).

In 2285, Admiral James T. Kirk oversees a simulator session of Captain Spock's trainees. In the simulation, Lieutenant Saavik commands the starship on a rescue mission to save the crew of the damaged ship Kobayashi Maru, but is attacked by Klingon cruisers and critically damaged. The simulation is a no-win scenario designed to test the character of Starfleet officers. Later, Dr. McCoy joins Kirk on his birthday; seeing Kirk in low spirits, the doctor advises Kirk to get a new command and not grow old behind a desk.