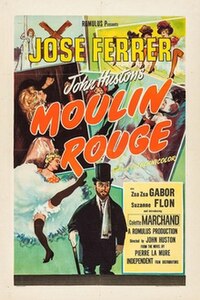 Moulin Rouge is a 1952 British drama film directed by John Huston, produced by John and James Woolf for their Romulus Films company and released by United Artists. The film is set in Paris in the late 19th century, following artist Henri de Toulouse-Lautrec in the city's bohemian subculture in and around the burlesque palace the Moulin Rouge. The screenplay is by Huston, based on the 1950 novel by Pierre La Mure. The cinematography was by Oswald Morris. This film was screened at the 14th Venice International Film Festival where it won the Silver Lion.

In 1890 Paris crowds pour into the Moulin Rouge nightclub as artist Henri de Toulouse-Lautrec finishes a bottle of cognac while sketching the club's dancers. The club's regulars arrive: singer Jane Avril teases Henri charmingly, dancers La Goulue and Aicha fight, and owner Maurice Joyant offers Henri free drinks for a month in exchange for painting a promotional poster. At closing time, Henri waits for the crowds to disperse before standing to reveal his four-foot six-inch stature. As he walks to his Montmartre apartment, he recalls the events that led to his disfigurement.