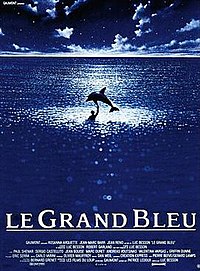 The Big Blue (released in some countries under the French title Le Grand Bleu) is a 1988 film in the French Cinéma du look visual style, made by French director Luc Besson. It is a heavily fictionalized and dramatized story of the friendship and sporting rivalry between two leading contemporary champion free divers in the 20th century: Jacques Mayol (played by Jean-Marc Barr) and Enzo Maiorca (renamed "Enzo Molinari" and played by Jean Reno), and Mayol's fictionalized relationship with his girlfriend Johana Baker (played by Rosanna Arquette).

Two children, Jacques Mayol and Enzo Molinari, have grown up on the Greek island of Amorgos in the 1960s. Enzo challenges Jacques to collect a coin on the sea floor but Jacques refuses. Later, Jacques' father — who harvests shellfish from the seabed using a pump-supplied air hose and helmet — goes diving. His breathing apparatus and rope gets caught and punctured by rocks on the reef and weighed down by water, he drowns. Jacques and Enzo can do nothing but watch in horror as he is killed.