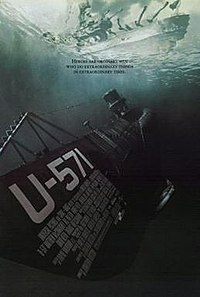 During the Battle of the Atlantic, after sinking a merchant ship from an Allied convoy, German U-boat U-571 has her engines badly damaged by depth charges from a British destroyer. U-571's skipper Kapitänleutnant Günther Wassner makes a distress call that is intercepted by American intelligence. The US Navy has its submarine S-33 modified to resemble a German resupply U-boat, to try to steal the Enigma machine coding device and sink the U-571. Before the crew of S-33 receives its assignment, the submarine's executive officer Lieutenant Tyler is unhappy about a recommendation for command of his own submarine being blocked by his commanding officer, Lieutenant Commander Dahlgren.