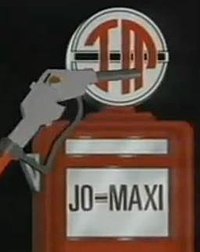 Jo Maxi, named after Dublin slang for a taxi, was an Irish teenage entertainment show which would report on teenage issues. The presenters would discuss issues relating to teenagers through reports and studio discussions. They would also review books, movies and other TV shows. Gig Guides and job/study information was also reported each night. It was broadcast on Network 2 as part RTÉ's redevelopment of its second channel from October 1988. It was first presented by Ray D'Arcy, Clíona Ní Bhuachalla and various other presenters and reporters.