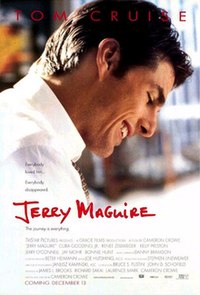 Jerry Maguire is a 1996 American romantic comedy-drama sports film written, produced, and directed by Cameron Crowe, and stars Tom Cruise, Cuba Gooding Jr., Renée Zellweger, and Regina King. Produced in part by long time Simpsons producer James L. Brooks, it was inspired by sports agent Leigh Steinberg, who acted as technical consultant on the crew. It was released in North American theaters on December 13, 1996, produced by Gracie Films and distributed by TriStar Pictures.

Jerry Maguire (Tom Cruise) is a glossy 35-year-old sports agent working for Sports Management International (SMI). After experiencing a life-altering epiphany about his role as a sports agent, he writes a mission statement about perceived dishonesty in the sports management business and his desire to work with fewer clients to produce a better personal relationship with them. In turn, SMI management decides to send Bob Sugar (Jay Mohr), Jerry's protégé, to fire him. Consequently, Jerry and Sugar each call all of Jerry's clients to try and convince them not to hire the services of the other. Jerry speaks to Arizona Cardinals wide receiver Rod Tidwell (Cuba Gooding Jr.), one of his clients who is disgruntled with his contract. He needs a $10 million contract for his family to live on. Jerry informs him if he gets injured for the season, he will get no money from the Cardinals. Rod tests Jerry's resolve through a very long telephone conversation, while Sugar is able to persuade the rest of Jerry's clients to stick with SMI instead.