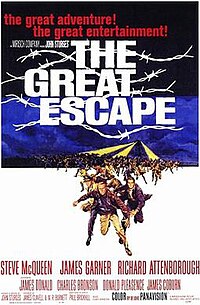 In late 1942, having expended enormous resources on repeatedly recapturing Allied POWs, the Nazi German armed forces move the most determined to Stalag Luft III, a new, max-security prisoner-of-war camp supervised by Luftwaffe Colonel von Luger. The prisoners establish an escape committee, the "X" Organization, led by "Big X", RAF Squadron Leader (and former Gestapo prisoner) Roger Bartlett. With the tacit approval of British Group Captain Ramsey—the most senior officer of any nationality in the camp, and therefore the prisoners' de facto leader—Bartlett proposes an audacious plan: to tunnel below the fence of the camp into the forest, to break out 250 of the men. He knows that, realistically, most of them will be recaptured—but the Germans will have to pull significant manpower away from the front for the search, aiding the Allied war effort.