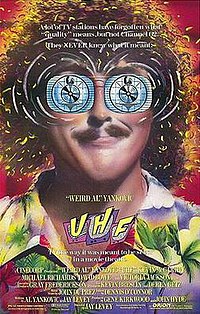 UHF (released internationally as The Vidiot from UHF) is a 1989 American comedy film starring "Weird Al" Yankovic, David Bowe, Fran Drescher, Victoria Jackson, Kevin McCarthy, Michael Richards, Stanley Brock, Gedde Watanabe, Billy Barty, Anthony Geary, Emo Philips and Trinidad Silva; the film is dedicated to Silva, who died shortly after filming wrapped. The film was directed by Jay Levey, Yankovic's manager, who also co-wrote the screenplay with him. The film was originally released by Orion Pictures and is currently owned by Metro-Goldwyn-Mayer. Yankovic and Levey struggled to find a production company to finance the film, but were eventually able to get Orion's support after stating they could keep the film costs under $5million. Principal photography took place around Tulsa, Oklahoma.

George Newman, a dreamer who bounces between jobs, is put in charge of Channel 62, a UHF television station, when his uncle Harvey wins ownership of it in a poker game. George and his friend Bob realize the station is nearly bankrupt, subsisting on reruns of old shows like The Beverly Hillbillies and Mister Ed. When a package meant for their competitor, VHF station Channel 8, is misdelivered to George at Channel 62, he decides to deliver it himself, only to be rudely thrown out by RJ Fletcher, Channel 8's CEO. Outside, George meets Stanley Spadowski, a janitor who had just been unfairly fired by RJ, and offers him a job at Channel 62.