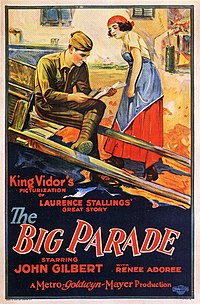 The Big Parade is a 1925 American silent war drama film directed by King Vidor, starring John Gilbert, Renée Adorée, Hobart Bosworth, Tom O'Brien, and Karl Dane. Written by World War I veteran, Laurence Stallings, the film is about an idle rich boy who joins the US Army's Rainbow Division and is sent to France to fight in World War I, becomes a friend of two working class men, experiences the horrors of trench warfare, and finds love with a French girl.

In the United States in 1917, James "Jim" Apperson's (John Gilbert) idleness (in contrast to his hardworking brother) incurs the great displeasure of his wealthy businessman father. Then America enters World War I. Jim informs his worried mother that he has no intention of enlisting, and his father threatens to kick him out of the house if he does not join. However, when he runs into his patriotic friends at a send-off parade, he is persuaded to enlist, making his father very proud.