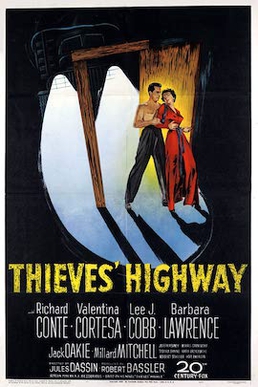 Thieves' Highway is a 1949 film noir directed by Jules Dassin. The screenplay was written by A. I. Bezzerides, based on his novel Thieves' Market. The film was released on DVD as part of the Criterion Collection in 2005.

A war-veteran-turned-truck driver Nico "Nick" Garcos (Richard Conte) arrives at home to find that his foreign-born father, a California fruit farmer, has lost his legs and was forced to sell his truck. He learns that his father was crippled at the hands of an unscrupulous produce dealer in San Francisco, Mike Figlia (Lee J. Cobb). Garcos vows revenge.