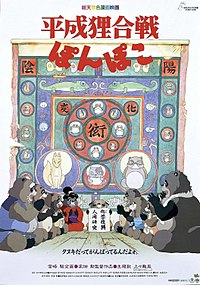 The story begins in late 1960s Japan. A group of tanuki are threatened by a gigantic suburban development project called New Tama, in the Tama Hills on the outskirts of Tokyo. The development is cutting into their forest habitat and dividing their land. The story resumes in early 1990s Japan, during the early years of the Heisei era. With limited living space and food decreasing every year, the tanuki begin fighting among themselves for the diminishing resources, but at the urging of the matriarch Oroku, they decide to unify to stop the development.