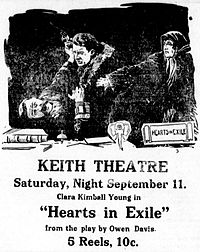 Hearts in Exile is a 1915 American film directed by James Young. It was produced by Peerless Pictures Studios when it and many other early film studios in America's first motion picture industry were based in Fort Lee, New Jersey at the beginning of the 20th century. A print of the film survives in the Archiva Nationala de Filme film archive.