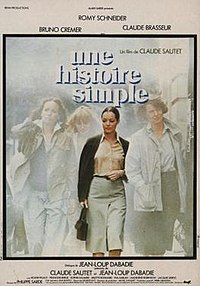 Finding herself pregnant at the age of 39, Marie has an abortion without telling her lover Serge, because she has decided she must live without him. Her mother disapproves and so does Gabrielle, one of her workmates. When made redundant, Gabrielle's husband Jérôme takes an overdose but Marie and Gabrielle save his life. To save his job, Marie looks up her ex-husband Georges, who says he will find Jérôme a place. This he does and, when his lover is away, Marie sleeps with him. However, Jérôme's confidence is gone and Georges has to let him go. When he admits this to Marie, she leaves him. After Jérôme in total despair kills himself, Gabrielle moves in with Marie, who finds herself pregnant again, this time by Georges. Going to see him, she realises there is no future with him and says nothing about her state. This time, she tells her workmates, she is going to have and bring up her baby.