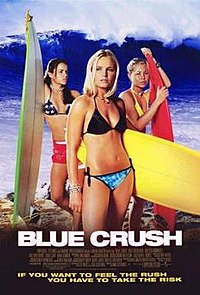 Blue Crush is a 2002 sports film directed by John Stockwell and based on Susan Orlean's 1998 Outside magazine article "Life's Swell". The film stars Kate Bosworth, Michelle Rodriguez, Sanoe Lake and Mika Boorem. It tells the story of three friends who have one passion: living the ultimate dream of surfing on Hawaii's famed North Shore.

Anne Marie (Kate Bosworth) and her 14-year-old sister, Penny (Mika Boorem), along with good friends Eden (Michelle Rodriguez) and Lena (Sanoe Lake), live in a small house on the North Shore. They all have been helping raise Anne Marie's young sister, ever since the mother took off to Las Vegas with a boyfriend.