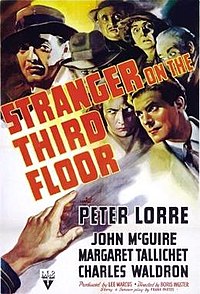 Stranger on the Third Floor 1940

Stranger on the Third Floor is a 1940 American film noir directed by Boris Ingster and starring Peter Lorre, John McGuire, and Margaret Tallichet, and featuring Elisha Cook Jr.. It was written by Frank Partos. Modern research has shown that Nathanael West wrote the final version of the screenplay, but was uncredited.

Reporter Michael Ward is the key witness in a murder trial. His evidence – that he saw the accused, Joe Briggs, standing over the body of a man in a diner – is instrumental in having Briggs found guilty.