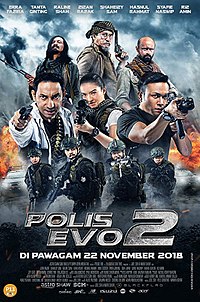 Polis Evo 2 (also known as Police Evo for Indonesian release) is a 2018 Malaysian police action film directed by Joel Soh and Andre Chiew, starring Zizan Razak and Shaheizy Sam reprise their respective roles, with Indonesian actress Raline Shah joined them as the main cast. It revolves Malaysian and Indonesian police to crippled a group of terrorists attacking a hostile village and detaining residents as the hostages. The film was released on 22 November 2018 and is a sequel to the 2015 film of the same title. In December 2018, Polis Evo 2 was listed by the local Malaysian newspaper Harian Metro as among the top 10 local films in Malaysian history. A third sequel of the film is currently in development, with Syafiq Yusof took the role as the director.

In Bongsun, Pahang, a shootout occurs between the Malaysian police and terrorist members of al-Minas. The shooting ends with the leader of al-Minas being heavily injured and captured, while his brother Saif Hasyam, escapes and vowing revenge.