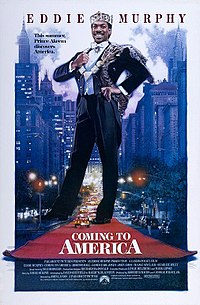 Coming to America is a 1988 American romantic comedy film directed by John Landis and based on a story originally created by Eddie Murphy, who also starred in the lead role. The film also co-stars Arsenio Hall, James Earl Jones, Shari Headley, and John Amos. The first installment in the Coming to America film series, it was released in the United States on June 29, 1988. Eddie Murphy plays Akeem Joffer, the crown prince of the fictional African nation of Zamunda, who travels to the United States in the hopes of finding a woman he can marry.

In the wealthy African nation of Zamunda, crown prince Akeem Joffer grows weary of his pampered lifestyle on his 21st birthday and wishes to do more for himself. When his parents, King Jaffe and Queen Aoleon, present him with an arranged bride-to-be, Akeem takes action. Seeking an independent woman who loves him for himself and not his social status, Akeem and his best friend/personal aide, Semmi, travel to the New York City borough of Queens and rent a squalid tenement in the neighborhood of Long Island City under the guise of poor foreign students. Beginning their search for Akeem's bride, they end up being invited by some locals to a rally that is raising money for the inner city. During the rally, Akeem encounters Lisa McDowell, who possesses all the qualities he is looking for and, upon his insistence, he and Semmi get entry-level jobs working at the local fast-food restaurant called McDowell's, a McDonald's knockoff owned by widower Cleo McDowell, Lisa's father.