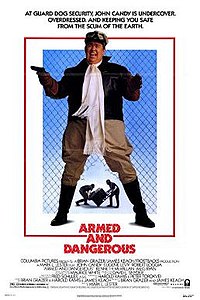 Armed and Dangerous is a 1986 American comedy film directed by Mark L. Lester and starring John Candy, Eugene Levy, Robert Loggia and Meg Ryan. It was filmed on location in and around Los Angeles, California.

LAPD Officer Frank Dooley is framed for the theft of a television set by two corrupt detectives. He is dismissed from the force, but escapes criminal punishment. The court's next case features hapless defense attorney Norman Kane attempting to defend a white supremacist leader, who threatens him with death should Kane fail to keep him out of prison. Kane reveals his ineptitude and the death threat to the judge, who agrees to render a long sentence if Kane promises to leave law behind.