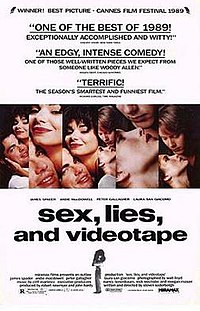 Sex, Lies, and Videotape is a 1989 American independent drama film written and directed by Steven Soderbergh. The plot tells the story of a troubled man who videotapes women discussing their lives and sexuality, and his impact on the relationships of a troubled married couple and the wife's younger sister.

Ann Bishop Mullany lives in Baton Rouge, unhappily but comfortably married to John, a successful lawyer. She is in therapy, where she reveals that she is repulsed by the idea of John touching her. Graham Dalton, an old close college friend of John and now a drifter with some money saved up, turns up nine years after college to visit John and perhaps live in Baton Rouge. When Graham arrives at John's he meets Ann, who learns that John has invited Graham to stay with them until he finds an apartment. When John arrives home, Graham's demeanor becomes remarkably more guarded; though he realizes he now has nothing in common with John, he and Ann get along well.