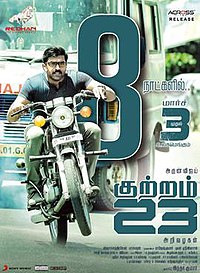 Kuttram 23 is a 2017 Indian Tamil-language action thriller film written and directed by Arivazhagan. Themed on medical crimes, the film stars Arun Vijay and Mahima Nambiar in the lead roles, with Vamsi Krishna, Aravind Akash, Amit Bhargav, Abhinaya, and Thambi Ramaiah, amongst others, in supporting roles. Produced by Inder Kumar along with Arun Vijay, the soundtrack album and background score for the film is composed by Vishal Chandrasekhar. The film was released worldwide on 3 March 2017 and was a hit at the box office.

The story starts with Jessica (Misha Ghoshal) confessing her sins to a priest at the St. Thomas Church in the outskirts of Chennai. The priest is then murdered, while Jessica is abducted.