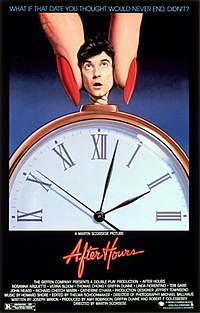 After Hours is a 1985 American black comedy film directed by Martin Scorsese, written by Joseph Minion, and starring Griffin Dunne with an ensemble cast. The film follows Paul Hackett, portrayed by Dunne, as he experiences a series of misadventures while making his way home from New York City's SoHo district during the night.

After a long and boring day at work, Paul Hackett, a computer data entry worker, meets Marcy Franklin in a local cafe in New York City. Marcy tells him that she is living with a sculptor named Kiki Bridges, who makes and sells plaster-of-Paris paperweights resembling cream cheese bagels, and leaves him her number. Later in the night, after calling the number under the pretense of buying a paperweight, Paul takes a cab to the apartment. On the way, his $20 bill is blown out the window of the cab, leaving him with only some change, much to the incredulousness of the cab driver. At the apartment, Paul meets Kiki, who is working on a sculpture of a cowering and screaming man, and, throughout the visit, comes across several pieces of evidence that imply Marcy is disfigured from burns. As a result of this implication and strange behavior from Marcy, Paul abruptly slips out of the apartment.