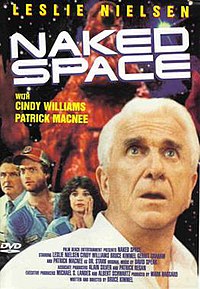 The Creature Wasn't Nice (also known as Naked Space and Spaceship) is a 1983 American comedy film written and directed by Bruce Kimmel. The movie is a parody of Alien. It stars Leslie Nielsen in a role similar to those in the farcical comedies Airplane and Naked Gun. It co-stars Cindy Williams, Gerrit Graham, and Patrick Macnee. It was released on VHS in 1983 under the title Spaceship to emphasize Nielsen's connection to Airplane!, and released on DVD in 1999 under the title Naked Space to play up the connection to Nielsen's Naked Gun movies.