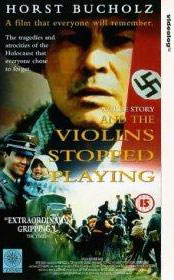 And the Violins stopped playing 1988

And the Violins Stopped Playing (1988) is a Polish/American historical drama film written produced and directed by Alexander Ramati and based upon his biographical novel about an actual group of Romani people who were forced to flee from persecution by the Nazi regime at the height of the Porajmos (Romani holocaust), during World War II.