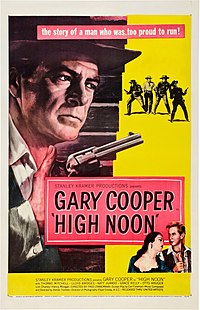 High Noon is a 1952 American Western film produced by Stanley Kramer from a screenplay by Carl Foreman, directed by Fred Zinnemann, and starring Gary Cooper. The plot, which occurs in real time, centers on a town marshal whose sense of duty is tested when he must decide to either face a gang of killers alone, or leave town with his new wife.

In Hadleyville, a small town in New Mexico Territory, in 1898, Marshal Will Kane, newly married to Amy Fowler, prepares to retire. The happy couple will soon depart for a new life to raise a family and run a store in another town. However, word arrives that Frank Miller, a vicious outlaw whom Kane sent to prison, has been released and will arrive on the noon train. Miller's gang—his younger brother Ben, Jack Colby, and Jim Pierce—await his arrival at the train station.