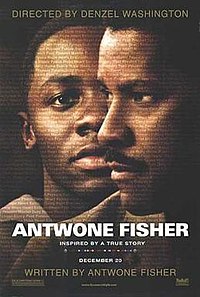 Antwone Fisher is a 2002 American biographical drama film directed by and starring Denzel Washington in his feature film directorial debut. Washington stars in the film as the psychiatrist Jerome Davenport, alongside Hollywood newcomer Derek Luke, who plays the title role (and personally knew the real Antwone Fisher), and ex-model Joy Bryant, as Fisher's girlfriend.

The film focuses on Antwone "Fish" Fisher, a temperamental young man with a violent history who is serving in the U.S. Navy. His father was killed before he was born and his teenage mother, Eva Mae Fisher, ended up arrested soon after and put in jail, where she gave birth to him. He was then placed in an orphanage until such time as she was released and could claim him. Since she had not yet claimed him, at the age of two Antwone was placed in a foster home run by a couple, Mr. and Mrs. Tate. Antwone suffers years of physical and emotional abuse at Mrs. Tate's hands, and is molested by her adult daughter Nadine. He finally leaves the home at age 14. After living out on the streets for the next few years, he decides to join the U.S. Navy to make something out of his life.