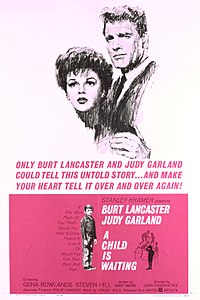 A Child Is Waiting is a 1963 American drama film written by Abby Mann based on his 1957 Westinghouse Studio One teleplay of the same name. The film was produced by Stanley Kramer and directed by John Cassavetes. Burt Lancaster portrays the director of a state institution for mentally handicapped and emotionally disturbed children, and Judy Garland is a new teacher who challenges his methods.

Jean Hansen (Garland), a Juilliard graduate, joins the staff of the Crawthorne State Mental Hospital and immediately clashes with the director, Dr. Matthew Clark (Lancaster), about his strict training methods. She becomes emotionally involved with 12-year-old Reuben Widdicombe (Bruce Ritchey), and is certain his attitude will improve if he is reunited with the divorced parents who abandoned him. She sends for Mrs. Widdicombe, who agrees with the doctor's opinion that it would be best if Reuben doesn't see her, but as she leaves the grounds, her son sees her and chases her car. Distraught, he runs away from the school.