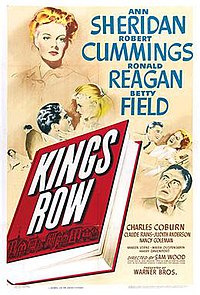 Kings Row is a 1942 film starring Ann Sheridan, Robert Cummings, and Ronald Reagan that tells a story of young people growing up in a small American town at the turn of the twentieth century. The picture was directed by Sam Wood.

In the small midwestern town of Kings Row, in 1890, five children know and play with each other: Parris Mitchell, a polite, clever little boy who lives with his grandmother; pretty blonde Cassandra Tower, daughter of the secretive Dr. Alexander Tower and a mother that is seen only through the upstairs window; the orphaned but wealthy and fun-loving Drake McHugh who is best friends with Parris; Louise Gordon, daughter of the town physician Dr. Henry Gordon; and the tomboy Randy Monaghan, from the "wrong side of the tracks", whose father, Tom, is a railroad worker.