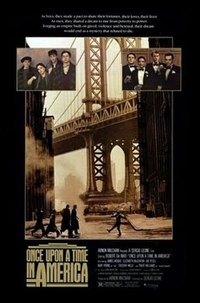 Once Upon a Time in America is a 1984 epic crime drama film co-written and directed by Italian filmmaker Sergio Leone and starring Robert De Niro and James Woods. The film is an Italian–American venture produced by The Ladd Company, Embassy International Pictures, PSO Enterprises, and Rafran Cinematografica, and distributed by Warner Bros. Based on Harry Grey's novel The Hoods, it chronicles the lives of best friends David "Noodles" Aaronson and Maximilian "Max" Bercovicz as they lead a group of Jewish ghetto youths who rise to prominence as Jewish gangsters in New York City's world of organized crime. The film explores themes of childhood friendships, love, lust, greed, betrayal, loss, broken relationships, together with the rise of mobsters in American society.

Three thugs enter a Chinese wayang theater, looking for a marked man. The proprietors slip into a hidden opium den and warn a man named "Noodles", but he pays no attention. In a flashback, Noodles observes police removing three disfigured corpses from a street. Although he kills one of the thugs pursuing him, Noodles learns they have murdered Eve, his girlfriend, and that his money has been stolen, so he leaves the city.