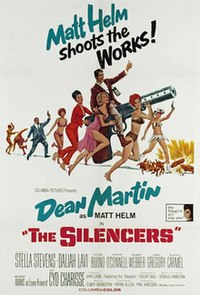 The Silencers is an American Pathécolor spy film spoof motion picture released in 1966 and starring Dean Martin as agent Matt Helm. It is loosely based upon and takes its title from the 1962 novel The Silencers by Donald Hamilton, and also adapts elements of Hamilton's first Helm novel, Death of a Citizen (1960).

Once a photographer by day, spy by night, Matt Helm is now a happily retired secret agent, shooting photos of glamorous models instead of guns and enjoying a close relationship with his assistant, the lovely Lovey Kravezit. But then his old boss, Macdonald, coaxes him back to the agency ICE to thwart a new threat from the villainous organization Big O.