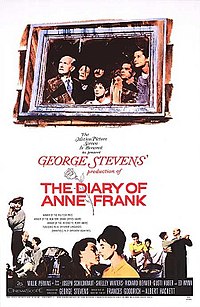 The Diary of Anne Frank is a 1959 film based on the Pulitzer Prize-winning play of the same name, which was in turn based on the diary of Anne Frank. It was directed by George Stevens, with a screenplay by Frances Goodrich and Albert Hackett. It is the first film version of both the play and the original story, and features three members of the original Broadway cast.

In 1945, as a truckload of war survivors stops in front of an Amsterdam factory at the end of World War II, Otto Frank (Joseph Schildkraut) gets out and walks inside. After climbing the stairs to a deserted garret, Otto finds a girl's discarded glove and sobs, then is joined and comforted by Miep Gies (Dodie Heath) and Mr. Kraler (Douglas Spencer), office workers who shielded him from the Nazis. After stating that he is now all alone, Otto begins to search for the diary written by his youngest daughter, Anne. Miep promptly retrieves it for him and he receives solace reading the words written by Anne three years earlier.