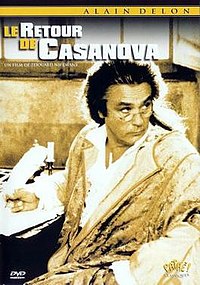 The Return of Casanova 1992

The Return of Casanova is a 1992 French period drama film directed by Édouard Niermans, and based on Arthur Schnitzler's novella Casanova's Homecoming. It was entered into the 1992 Cannes Film Festival.

After many years of rambling across Europe the aging Giacomo Casanova is impoverished. He wants to return to the Republic of Venice but he doesn't dare going there directly because he was a fugitive when he left. While he tries to find a way to get a pardon he meets a young lady named Marcolina. The more he shows his affection, the more ostentatiously she rejects him. Even so he doesn't give up on her because her lover Lorenzo has grave gaming debts. In return for the required money Lorenzo tells Casanova about a looming secret rendezvous with Marcolina. Moreover he lets Casanova take his place. Undercover of the night Casanova finally seduces her. Lorenzo later feels his honour was besmirched and demands satisfaction. Casanova kills him in a duel and then goes home to Venice.