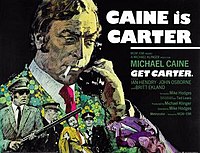 Get Carter is a 1971 British crime film directed by Mike Hodges and starring Michael Caine, Ian Hendry, Britt Ekland, John Osborne and Bryan Mosley. The screenplay was adapted by Hodges from Ted Lewis's 1970 novel Jack's Return Home. Producer Michael Klinger optioned the book and made a deal for the ailing Metro-Goldwyn-Mayer (MGM) studio to finance and release the film, bringing in Hodges and Caine. Caine became a co-producer of the film. Get Carter was Hodges's first feature film as director, as well as being the screen debut of Alun Armstrong. MGM was reducing its European operations and the film became the last project approved before it closed its Borehamwood studios. The film is set in north-east England and was filmed in and around Newcastle upon Tyne, Gateshead and County Durham.

Newcastle-born gangster Jack Carter (Michael Caine) has lived in London for years in the employ of organised crime bosses Gerald and Sid Fletcher (Terence Rigby and John Bindon). Jack is sleeping with Gerald's girlfriend Anna (Britt Ekland) and plans to escape with her to South America, but he must first return to Newcastle and Gateshead to attend the funeral of his brother, Frank, who died in a purported drunk-driving accident. Unsatisfied with the official explanation, Jack investigates for himself. At the funeral Jack meets his teenage niece Doreen (Petra Markham) and Frank's evasive mistress Margaret (Dorothy White); it is later implied that Doreen is Jack's daughter.