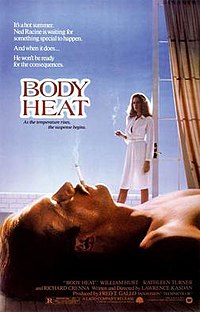 During a particularly intense Florida heatwave, inept local lawyer Ned Racine meets and begins an affair with Matty Walker. She is married to wealthy businessman, Edmund Walker, who is home only on the weekends. One night, Ned arrives at the Walker mansion and playfully propositions a woman he mistakes as Matty. The woman, who bears a strong resemblance to Matty, is Mary Ann Simpson, Matty's visiting high school friend. Soon after, Matty tells Ned she wants to divorce Edmund, but their prenuptial agreement would leave her with little money. She also says that she wishes her husband dead. Eventually, Ned suggests murdering Edmund so Matty can inherit his wealth. He consults a shady former client, Teddy Lewis, an expert on incendiary devices, who supplies Ned with a bomb while strongly encouraging him to abandon whatever he is scheming.