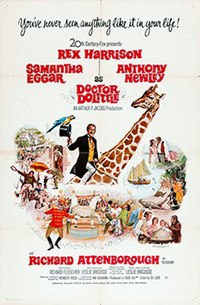 In early Victorian England, Matthew Mugg (Anthony Newley) takes his young friend Tommy Stubbins (William Dix) to visit eccentric Doctor John Dolittle (Rex Harrison) for an injured duck that Matthew had acquired from a local fisherman. Dolittle, a former medical doctor, lives with an extended menagerie, including a chimpanzee named Chee-Chee, a dog named Jip, and a talking blue-and-yellow macaw named Polynesia (the uncredited voice of Ginny Tyler). Dolittle claims that he can talk to animals. In a flashback, he explains that he kept so many animals in his home that they created havoc with his human patients, who took their medical needs elsewhere. His sister, who served as his housekeeper, demanded that he dispose of the animals or she would leave; he chose the animals. Polynesia taught him that different animal species can talk to each other, prompting Dolittle to study animal languages so that he could become an animal doctor. He is planning his latest expedition: to search for the legendary Great Pink Sea Snail.