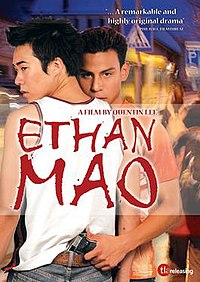 Ethan Mao is a 2004 drama film written and directed by Quentin Lee. It was shown at the AFI Film Festival on November 10, 2004 and the Hong Kong Lesbian and Gay Film Festival on December 10 of the same year. The DVD was released in North America on September 20, 2005.

Ethan Mao (Jun Hee Lee) is an Asian closeted gay teen who is kicked out of his house after his manipulative stepmother Sarah (Julia Nickson-Soul) finds a gay pornographic magazine in his room and shows it to his traditionalist father. On the street, Ethan is forced to become a hustler for money. Soon, he meets Remigio (Jerry Hernandez), a teen hustler and drug dealer, and the two become friends and live together.