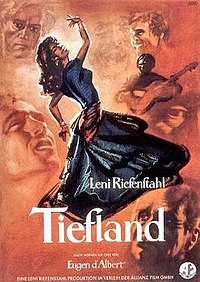 ("Lowlands") is a 1954 West German opera drama film directed, produced, co-written, edited by and starring Leni Riefenstahl, and based on the 1903 eponymous opera composed by Eugen d'Albert to a libretto by Rudolph Lothar based on the 1896 Catalan play Terra baixa by Àngel Guimerà. The film co-stars Bernhard Minetti, and is Riefenstahl's last feature film as both director and lead actress.

Pedro, a shepherd, is sleeping in his Pyrenean mountain hut when his herd is attacked by a lone wolf. He awakens to defend his sheep, and manages to strangle the wolf. Meanwhile, in the Catalan lowlands of northeastern Spain, a canal is completed which diverts water from the farms and fields of the peasants to support the prize bulls of the landowner, Don Sebastian, marquis of Roccabruno. He arrogantly rejects the request of the peasants for water. However, he has significant debts and needs money. The rich Amelia plans to marry him, but he offends her.