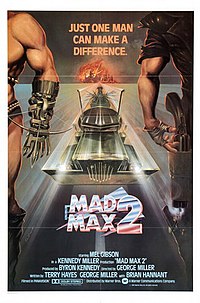 Mad Max 2 (released as The Road Warrior in the United States) is a 1981 Australian post-apocalyptic action film directed by George Miller. It is the second installment in the Mad Max film series, with Mel Gibson reprising his role as "Mad" Max Rockatansky. The film's tale of a community of settlers who moved to defend themselves against a roving band of marauders follows an archetypical "Western" frontier movie motif, as does Max's role as a hardened man who rediscovers his humanity when he decides to help the settlers. Filming took place in locations around Broken Hill, in the outback of New South Wales.

Following a global war and the collapse of civilization after the Earth's oil supplies were nearly exhausted, barbaric anarchy has become the world's everyday law. Haunted by the death of his family, former policeman Max Rockatansky now roams the desert wilderness of a post-apocalyptic Australia in a scarred, black, supercharged V-8 Pursuit Special. Scavenging for food and petrol, Max's only companions are an Australian Cattle Dog and a sawn-off shotgun with scarce ammunition. After driving off a gang led by the unhinged biker warrior Wez, and taking petrol from one of their wrecked vehicles, Max finds a nearby gyrocopter and decides to collect its fuel. The gyrocopter is boobytrapped, but Max overpowers the pilot hiding nearby, sparing his life upon being told of a small oil refinery nearby in the wasteland. However, upon arriving, Max finds the compound under siege by the Marauders, a motley gang of racers and motorcyclists of which Wez is a member. The Marauders' leader, a large disfigured man called "Lord Humungus", has his gang swarm the complex daily, believing that the compound contains some kind of petrol reserves or even a small refinery.