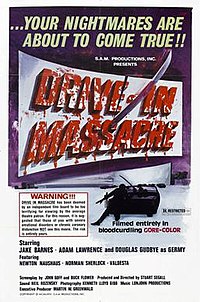 A couple go to a drive-in theater in a rural California town, and are butchered by an unseen assailant, who uses a sword to decapitate the man, and skewer the woman through the neck. Investigating this dual homicide are police detectives Mike Leary and John Koch, who interview the drive-in's boorish manager, Austin Johnson, and the odd custodian, Germy. Germy mentions that a peeping tom likes to cruise the area to watch couples and lone girls, and he is told to try and write down the voyeur's license plate number the next time he sees him.