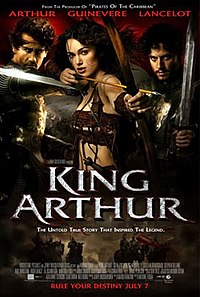 King Arthur is a 2004 historical adventure film directed by Antoine Fuqua and written by David Franzoni. It features an ensemble cast with Clive Owen as the title character, Ioan Gruffudd as Lancelot and Keira Knightley as Guinevere, along with Mads Mikkelsen, Joel Edgerton, Hugh Dancy, Ray Winstone, Ray Stevenson, Stephen Dillane, Stellan Skarsgård and Til Schweiger.

In the 5th century AD, the declining Roman Empire is withdrawing from Britannia, where the native Woads, led by Merlin, stage an insurgency. A group of Sarmatian knights and their half-British Roman commander Artorius Castus, known as "Arthur", have fulfilled their duties to Rome and are preparing to return home until Bishop Germanus orders them to complete one final mission: evacuate an important Italian family from north of Hadrian's Wall, saving them from an advancing army of invading Saxons, led by the ruthless Cerdic and his son, Cynric. Alecto, the son of the family patriarch, is a viable candidate to be a future Pope. Arthur and his remaining men - Lancelot, Tristan, Galahad, Bors, Gawain, and Dagonet - reluctantly accept the mission.