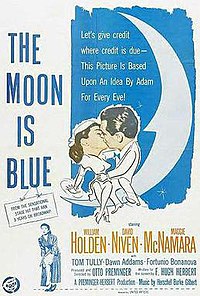 The Moon Is Blue is a 1953 American romantic comedy film produced and directed by Otto Preminger and starring William Holden, David Niven, and Maggie McNamara. Written by F. Hugh Herbert and based on his 1951 play of the same title, the film is about a young woman who meets an architect on the observation deck of the Empire State Building and quickly turns his life upside down. Herbert's play had also been a huge success in Germany, and Preminger decided to simultaneously film in multiple languages, namely, English and German, using the same sets but different casts. The German film version is Die Jungfrau auf dem Dach.

A comedy of manners, the film centers on virtuous actress Patty O'Neill, who meets playboy architect Donald Gresham on the top of the Empire State Building and accepts his invitation to join him for drinks and dinner in his apartment. There she meets Donald's upstairs neighbors, his ex-fiancée Cynthia and her father, roguish David Slater.