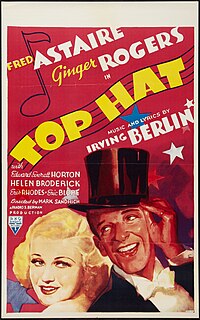 An American dancer, Jerry Travers comes to London to star in a show produced by the bumbling Horace Hardwick. While practicing a tap dance routine in his hotel bedroom, he awakens Dale Tremont on the floor below. She storms upstairs to complain, whereupon Jerry falls hopelessly in love with her and proceeds to pursue her all over London.