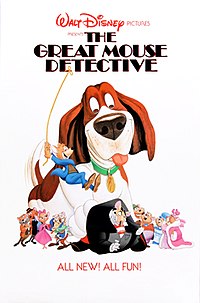 In London in June 1897, a young mouse named Olivia Flaversham is celebrating her birthday with her single father, toymaker Mr. Flaversham. Suddenly, a bat with a crippled wing and a peg leg bursts into the toyshop, kidnapping Flaversham. Olivia leaves to find Basil of Baker Street, the famous Great Mouse Detective, but gets lost. David Q. Dawson, a retired army surgeon mouse newly returned from Afghanistan, meets Olivia and escorts her to Basil's residence. Being busy already, Basil initially dismisses them. Olivia then mentions the bat that abducted her father, and Basil realizes that Olivia saw Fidget, the assistant of Professor Ratigan, the criminal mastermind whom Basil was working to catch. It is then revealed that Ratigan kidnapped Flaversham to create a clockwork robot replica of the Queen of the Mice, so that Ratigan can usurp her place as "Supreme Ruler of all Mousedom". Flaversham initially refuses to participate in the scheme, but capitulates when Ratigan threatens to harm Olivia.