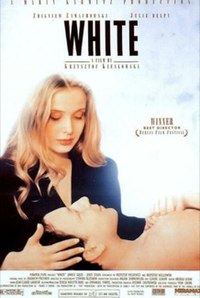 Three Colours: White (, ) is a 1994 French-Polish comedy-drama film co-written, produced, and directed by Krzysztof Kieślowski. White is the second in the Three Colours trilogy, themed on the French Revolutionary ideals, following Blue and preceding Red. The film was selected as the Polish entry for the Best Foreign Language Film at the 67th Academy Awards, but was not accepted as a nominee.

After opening with a brief, seemingly irrelevant scene of a suitcase on an airport carousel, the story quickly focuses on a Paris divorce court where Karol Karol (Zbigniew Zamachowski) is pleading with the judge the same legal proceedings that Juliette Binoche's character briefly stumbled upon in Blue. The immigrant Karol, despite his difficulty in understanding French, is made to understand that his wife Dominique (Julie Delpy) does not love him. The grounds for divorce are humiliating: Karol was unable to consummate the marriage. Along with his wife, he loses his means of support (a beauty salon they jointly owned), his legal residency in France, and the rest of his cash in a series of mishaps, and is soon a beggar. He only retains a two franc coin.