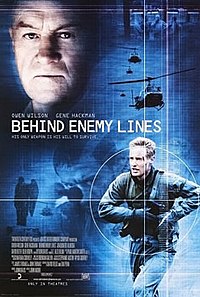 Behind Enemy Lines is a 2001 American war film directed by John Moore in his directorial debut, and starring Owen Wilson and Gene Hackman. The film tells the story of Lieutenant Chris Burnett, an American naval flight officer who is shot down over Bosnia and uncovers genocide during the Bosnian War. Meanwhile, his commanding officer is struggling to gain approval to launch a combat search and rescue mission to save Burnett. The plot is loosely based on the 1995 Mrkonjić Grad incident that occurred during the war.

During the Bosnian War, United States Navy flight officer Lieutenant Chris Burnett and pilot Lieutenant Jeremy Stackhouse are stationed on the aircraft carrier USS ''Carl Vinson'' in the Adriatic Sea. Burnett is preparing to leave the Navy, and clashes with his commanding officer, Admiral Reigart. On Christmas, Reigart assigns Burnett and Stackhouse to fly an aerial reconnaissance mission, which goes smoothly until they spot unusual activity in the demilitarized zone. Burnett persuades Stackhouse to fly their F/A-18F Super Hornet off-course for a closer look, unaware that they are photographing Serb Volunteer Guard soldiers burying massacred Bosnian Muslim civilians in mass graves. The local Bosnian Serb paramilitary commander, General Miroslav Lokar, is conducting a secret genocidal campaign against the Bosniak population, and orders the jet be shot down.