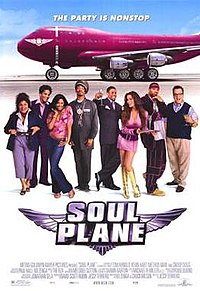 Nashawn Wade (Kevin Hart) claims that he has loved planes since he was a baby, but he has a horrible experience with a typical airline: his dog Dre was classified as a checked baggage instead of a carry-on, he eats a horrible airline meal, his buttocks gets stuck in the toilet while he has diarrhea (due to his meal) during turbulence, and Dre is fatally sucked through a jet engine (after a stewardess accidentally opens the cargo door). In response to the torture he has, he sues the airline and is awarded $100,000,000 by the jury. He decides to use the money to start his own airline, called N.W.A. (Nashawn Wade Airlines), whose acronym and logo are a pop culture reference to rap group N.W.A. The airline specifically caters to African Americans and hip hop culture. The terminal at the airport is called the Malcolm X terminal, where two non-working TSA Agents, Jamiqua (Mo'Nique) and Shaniece (Loni Love), are goofing off instead of checking belongings. The plane is a heavily modified Boeing 747SP, customized with low-rider hydraulics, spinners, blended winglets to compensate for the drag from the decorations, and a dance club. The safety video is also a parody of the Destiny's Child song "Survivor".